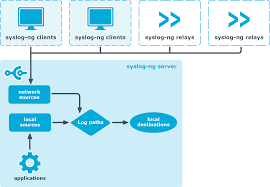 The file /etc/syslog.conf contains information used by the system log daemon, syslogd(1M), to forward a system message to appropriate log files and/or users. syslogd preprocesses this file through m4(1) to obtain the correct information for certain log files, defining LOGHOST if the address of "loghost" is the same as one of the addresses of the host that is running syslogd.

A configuration entry is composed of two TAB-separated fields:

The selector field contains a semicolon-separated list of priority specifications of the form:

where facility is a system facility, or comma-separated list of facilities, and level is an indication of the severity of the condition being logged. Recognized values for facility include:

Messages generated by user processes. This is the default priority for messages from programs or facilities not listed in this file.

Messages generated by the kernel.

System daemons, such as in.ftpd(1M)

Designated for the UUCP system; it does not currently use the syslog mechanism.

Designated for cron/at messages generated by systems that do logging through syslog. The current version of the Solaris Operating Environment does not use this facility for logging.

Designated for audit messages generated by systems that audit by means of syslog.

Designated for local use.

An asterisk indicates all facilities except for the mark facility.

Recognized values for level are (in descending order of severity):

For panic conditions that would normally be broadcast to all users.

For conditions that should be corrected immediately, such as a corrupted system database.

For warnings about critical conditions, such as hard device errors.

For conditions that are not error conditions, but may require special handling. A configuration entry with a level value of notice must appear on a separate line.

For messages that are normally used only when debugging a program.

Do not send messages from the indicated facility to the selected file. For example, a selector of

sends all messages except mail messages to the selected file.

For a given facility and level, syslogd matches all messages for that level and all higher levels. For example, an entry that specifies a level of crit also logs messages at the alert and emerg levels.

The action field indicates where to forward the message. Values for this field can have one of four forms:

Blank lines are ignored. Lines for which the first nonwhite character is a '#' are treated as comments.

With the following configuration file: